Hero Stevenson, Bazaar, August 5, 2015
Open a larger version of the following image in a popup:
Share 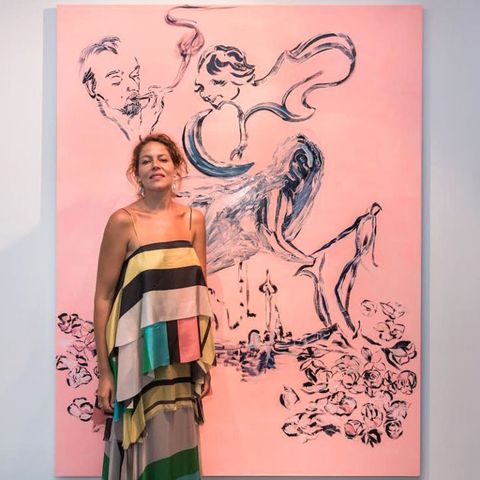 Friday evening, Lola Montes Schnabel opened her fifth solo exhibition, Akashic Records, at the Tripoli Gallery's new East Hampton location. When the sun set over the intimate reception, the inspiration behind Schnabel's luminous works became undoubtedly clear. The paintings are a series of chimerical scenes, freeform lines, and warm, balmy hues – exploring the relationship of various media in the artist's creation of unique, personal artwork. Whimsically clad in purple mascara and a flowing maxidress, Lola took a moment to discuss sunsets, the astral plane, and her creative process.

Harper's BAZAAR: I love your purple eyes, they're amazing!

Lola Schnabel: Thank you! You only see it in the light. I love my purple mascara – I've been wearing it since I was eighteen!

HB: What inspired the creation of Akashic Records?

LS: I made an etching at this place called Fondazione Il Bisonte, and I found that when you dig into copper, you can't really make any mistake, whatever line your hand creates becomes something. When I was a child I used to make a lot of drawings as well, and I never used an eraser – so I wanted to make paintings that captured that same organic depth. I thought about how to make a relief on a piece of wood that I could dig into, that kind of looked like icing or something. I mixed Elmer's glue with molding paste and enamel boat paint and then added pure pigment, like fluorescent orange and red to make this kind of glowing color – I wanted the surface to reflect light. I was looking a lot at the sunset and how things turn pink for that ten minutes and you see it on someone's face or reflected on a window. I was also thinking about the astral plane and heaven and what that space looks like in between. I discovered this book called the Akashic Records, which is basically a kind of file of who you are, and it got me thinking about the idea of life being half written, the writing of the other half by us, and where those two intersect. You think of all of this data we're collecting in this cyber space, like when we send a message through the ether, that same space in ancient tribes was dedicated to the spirit in all things – the fiber in the dress you're wearing or in an object like a chair, so, are those two things fusing? Is that same invisible space that holds all data the same space that we come from and go to? I just wanted to make drawings that float in their own air and space, and aren't attached to anything. 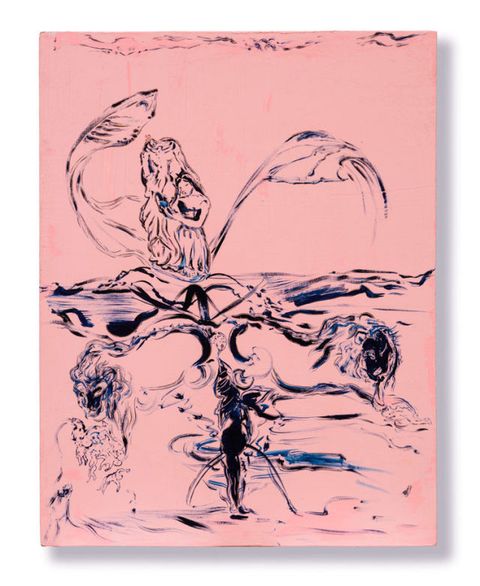 HB: Can you describe the evolution that has occurred in your work since your first solo exhibition?

LS: The first show was much more hodge-podge, I think this is the most focused show I've done by far. I've always done printmaking and photography and filmmaking and painting, and I just wanted to show everything and how it was connected. But in the end you've got to kind of baby feed people things, because if you look at what's happening in the art world, it's all about a gimmick. People need one thing that they focus on – whether it's a bird-shit painting by Dan Colen or a raindrop painting from Lucien Smith. It's all about how to make a unique surface. I think that everyone's job as an artist is facing the challenge of making a surface that's different. For me, the etching turned into painting, then carving, and then it went back into painting where I'm scraping away with a palette knife.

HB: As well as being a painter, you're also a sculptor, a filmmaker, and a photographer – do you find that your work in the different mediums inspire one another?

LS: For sure. Sometimes I'll make a whole film just to get one image that didn't exist, and then the image becomes a painting, and the film is destroyed. There's a process to all of this and I'm interested in all of the layers and process – if I hadn't made that one etching, these paintings wouldn't exist. I think that every idea you have deserves a different medium. I like to do portraits of people that capture their temperament, but then when you film someone it can capture their whole world. I really try to think of what medium is going to capture what I want to say the most, and I don't want to limit myself to just one thing because these are all tools that are available to us. 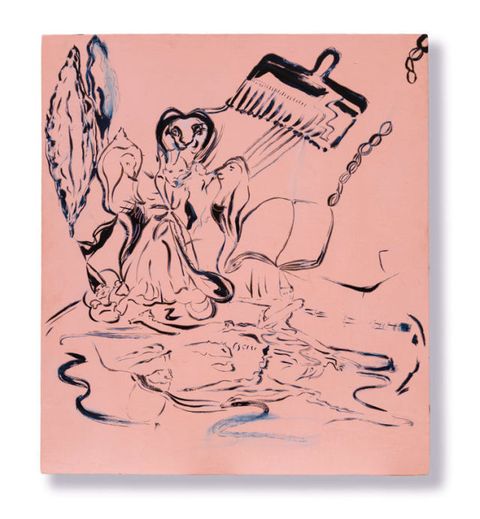